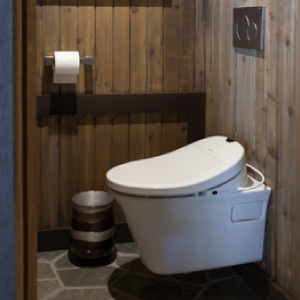 While toilets are absolutely necessary, most people do not consider them luxurious. There are a few exceptions, as these five examples show that there are people out there who take the term “throne” rather seriously.

#1. Dagobert Wooden Toilet
This toilet is named after King Dagobert, a ruler during France’s Merovingian Dynasty during the 8th Century. Resembling a solid wooden throne, it contains a high back and wide armrests, along with a painted porcelain “pot.” Sitting more than five feet high, this toilet also has a candle holder and ashtray along with some musical functions. The estimated value of this toilet is approximately $14,123.

#2. Swarovski Crystal Studded Toilet
Jewelry maker Swarovski has designed a gem-studded toilet with an estimated value of more than $128,000. In all, this toilet is encased in more than 72,000 Swarovski crystals, which completely cover the tank, base, handle, and seat cover, with the remainder being chrome plated. It was rolled out at the 2015 China International Kitchen & Bathroom Expo, and is currently on display only.

#3. Moon River Art Park Cave Restroom
This is the only toilet on the list that is available for public use. Found in Shanghai’s Moon River Art Park, the toilet is actually considered a tourist attraction, as people often wait in line for up to two hours to use it. It is located inside a man-made cave, and you must pay an entry fee to the park in order to access it. There are multiple stalls and wash stations for both men and women that feature natural rock and stalactite-like sculptures. The estimated value of this toilet (and surrounding cave) is somewhere in the neighborhood of about $750,000.

#4. Hang Fung Gold Toilet
Owned by the Hang Fung Company, this Chinese toilet is made from solid, 24-carat gold. Located inside a demonstration washroom known as the “Hall of Gold”, it is not operational, but instead is designed only for public viewing. Everything located in the same washroom is also made of solid gold, including the flooring, walls, and bathtub surround. Unfortunately, this toilet may not hold its value much longer, as rumors are circulating that people are now removing some of its gold, melting it down to sell at today’s higher market prices.

#5. International Space Station Toilet
The most expensive toilet in the world isn’t actually on earth, but rather is located in the International Space Station. Worth more than $19 million, this toilet contains high-tech fan features that allow waste to be suctioned immediately into a separate septic tank. This waste is then run through a special filter that actually extracts water from waste matter and then purifies it, making it safe enough for drinking. Special leg braces also hold the toilet at the perfect position for astronauts to use.

These five very expensive toilets show that there are endless ways to make even ordinary fixtures seem extraordinary. While they may not be practical for most homes, their creative designs are nonetheless something to marvel over.